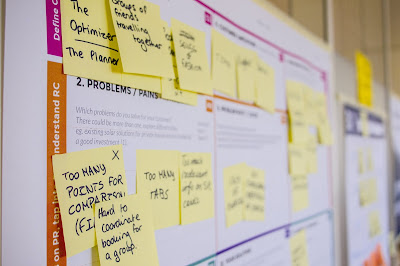 How often have you faced a business problem that made you say, “I wish I could crunch numbers or create those fancy data models that are the philosopher’s stone of problem-solving?” I have asked myself this question many times. Not only that, but I have also gone down the long road of learning advanced excel & basic SQL to attack the beast. But how many times have I taken out the big guns? Not many times. After multiple failures to become an analysis ninja I came to an overpowering realization – there were two important differences between problems that were solved well vs. the ones that were never solved –

That’s when I realized what Einstein meant in his famous quote, “If I had an hour to solve a problem and my life depended on it, I would use the first 55 minutes determining the proper question to ask, for once I know the proper question, I could solve the problem in less than five minutes.”

We aren't Einstein, so most of us would take much longer than 5 minutes, but his point is that if framing is important, are there any simple ways to help us make sense of the scope of the problem before we dive right in? Is there a way to assess the magnitude and direction of the problem before going to the field (testing) & losing valuable resources (time, money, people) in the process?

Pursuing this question led me to a remarkable book – "Bulletproof Problem Solving" by Charles Conn & Robert McLean. The entire book is a gem worth reading multiple times but the chapter on Analyses includes the table below that I have now printed out and stuck on my desk! 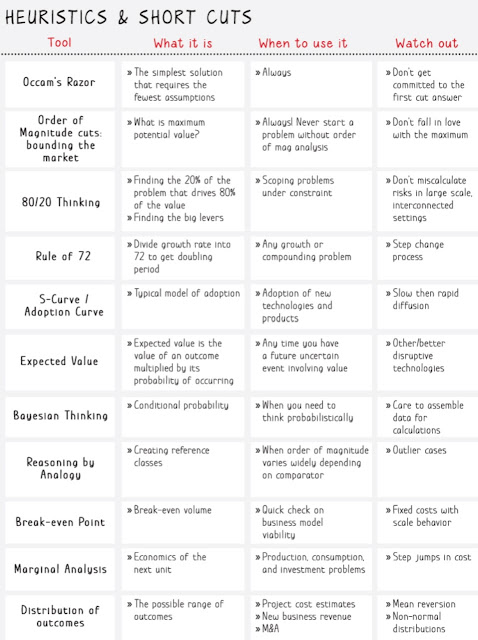 As you can see the table includes existing models, heuristics and shortcuts that can be successfully applied to solve problems. Most of us would have heard of the common rules of thumb such as Occam's razor and 80/20 or Pareto principle. Charles & Robert’s magic is making it instantly useful, by breaking them down to their components - what it is, when to use it and what to watch out for while using it. What to watch out for is the most important of these.

The brilliant chapter goes on to explain each of these tools and their application to individuals, enterprises, and citizens for solving a variety of problems – social, personal, corporate, strategic.

Since then, I have utilized some of these tools in a critical project – a healthcare start-up that had to prioritize which features to include in their next app build. We did the usual market research, user surveys, team brainstorms but the data did not highlight any outliers instead it pointed out 4 important features that got almost the same score. The cash-strapped team only had a ballpark estimate of how much one of them would cost to build but opex was missing from the calculation. Just to estimate the full cost would be unnecessary spending that could be diverted to customer support, logistics, and other activities that have become critical for a healthcare company during COVID.

So how to choose? And how to rationalize the choice to the investors when the “big guns” weren’t available?

Here's what we did. First, we used the distribution of outcomes to determine what would be the contingencies for cost overruns viz. internal testing, UX design, A/B testing, beta launch, early client feedback, support team training and eventually finalizing the feature and UX. This led us to ask the question for which of these "the worst case is bad enough". This immediately eliminated one of the options.

Now that we had scale and direction we moved to the straightforward detective framework - who, what, where, when, how and why to quickly do a root cause analysis to clarify the remaining choices and how to evaluate them. This eliminated one more option.

How long did take for us to do all this - a little more than 3 days. We presented the research data to investors along with the remaining options & our rationale for elimination. We now knew the parameters to evaluate the remaining two features and take out the big guns. Additionally, we also gained investor confidence to secure funds for the project.

These tools aren’t new. Most of us who have been working for a while or have MBAs would have come across these tools and even used them. What’s important is to realize that sometimes a needle is more effective than a sword.

Have you tried any of these tools? Which of these did you find most useful?

If you haven’t, I highly recommend reading Bulletproof Problem Solving and getting your hands dirty!